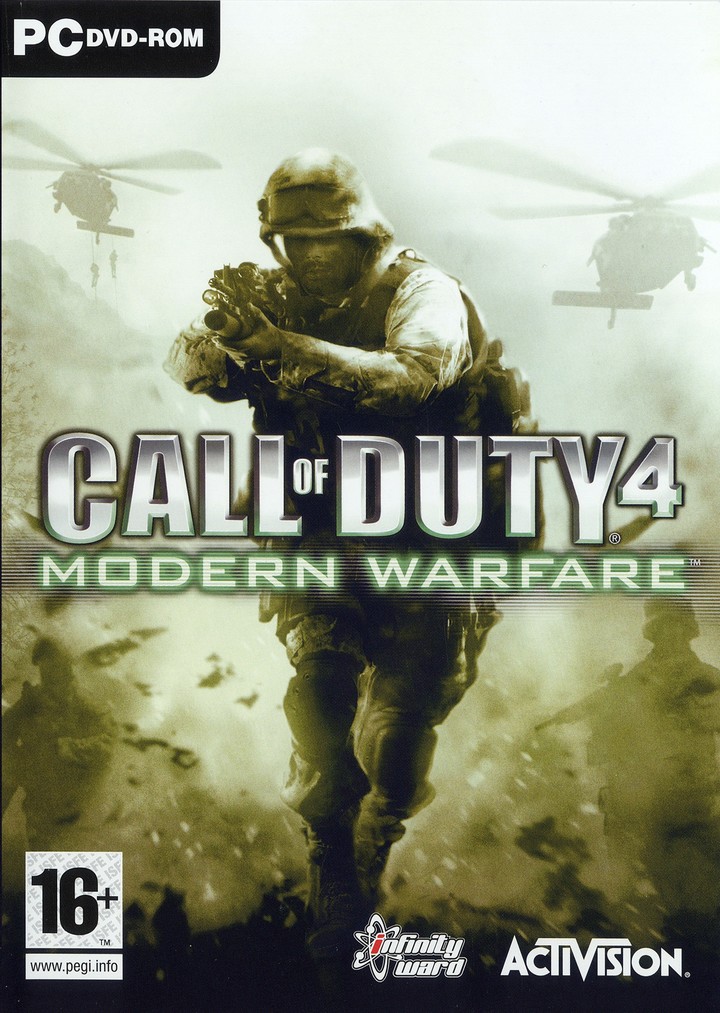 The game starts with Sergeant John "Soap" MacTavish beginning his career with the British SAS at a training camp in Credenhill, U.K. There, he trains for a cargo ship raid.

After they board the ship, located in the Bering Sea, Soap, Captain Price, Gaz, and several SAS members attempt to find a nuclear device on board.

The game starts with Sergeant John "Soap" MacTavish beginning his career with the British SAS at a training camp in Credenhill, U.K. There, he trains for a cargo ship raid.

After they board the ship, located in the Bering Sea, Soap, Captain Price, Gaz, and several SAS members attempt to find a nuclear device on board. As they clear the ship and kill the Russian soldiers aboard, the ship is attacked by Russian MiGs and begins to sink. The team escapes with the cargo manifest, which provides evidence of ties between the Russian Ultranationalist Party and a rebel faction in the Middle East.

Russian Ultranationalist leader Imran Zakhaev, who plans to return his motherland to the times of the Soviet Union, draws international attention away from his plans by funding a coup d'état in an unnamed Middle Eastern country, organized by a local separatist leader named Khaled Al-Asad. Discovering the plot, the American government starts a police action to stop the uprising, while the SAS continues to operate in Russia. After President Al-Fulani of the Middle Eastern country is executed on live television and Al-Asad takes control, the SAS rescue their compromised agent, Nikolai, from Russian Ultranationalist forces.

One section of the game takes place in Prypiat, Ukraine. Several iconic aspects of the abandoned city, such as this square, were recreated in the game.

In the American invasion of the Middle Eastern country, a platoon from the USMC 1st Force Recon, led by Lieutenant Vasquez, deploys to search for Al-Asad, but are too late, and proceed to aid other American units fighting the separatists. During the final stages of the operation, United States Central Command learns of Al-Asad's position in the capital, but is also notified by SEAL Team Six of a Russian nuclear weapon nearby, and sends the Nuclear Emergency Support Team to disarm it. However, the nuclear device suddenly detonates, leveling most of the city, killing his own army, citizens, and the US Invasion Force of 30,000 Marines. Just before the detonation, Vasquez's squad makes a last minute rescue of a pilot from a downed AH-1 Cobra. While fleeing the city, the helicopter is caught in the blast, killing everyone on board..

The British learn that Al-Asad fled the country before the American invasion, and is hiding in a safe house in Azerbaijan. With the help of Nikolai's intelligence and assistance from Loyalist Russian soldiers, the SAS clear the village of the Ultranationalist forces and capture and interrogate Al-Asad at his safe house. After listening to the voice calling Al-Asad's phone, Captain Price executes Al-Asad, now knowing that Zakhaev is Al-Asad's backer. Price then has a flashback of his mission to eliminate Zakhaev in Prypiat, Ukraine, 15 years earlier.
In the aftermath of the Chernobyl disaster and the collapse of the Soviet Union, Zakhaev took advantage of the turmoil to profit from nuclear proliferation and used his new wealth to lure soldiers from the Soviet Army to form his Ultranationalist Party. In 1996, Price was paired with Captain MacMillan, a Scottish SAS captain, to carry out the black op assassination of Zakhaev. After sneaking into Prypiat and taking up a position in an abandoned hotel, MacMillan spotted Zakhaev, and Price hit him with a shot from a Barrett M82, but Zakhaev survived, losing an arm. Price and MacMillan were pursued, but escaped, with MacMillan sustaining an injured leg in the process.
Back in the present day, a joint operation is conducted by Price's SAS unit, a USMC Force Recon unit led by Staff Sergeant Griggs, and Loyalist Russian forces led by Sergeant Kamarov, to stop Zakhaev. They capture his son Victor in an unnamed Russian city, to learn of Zakhaev's whereabouts, but as they corner him, Victor commits suicide to avoid being captured. Zakhaev becomes enraged, blaming Western nations for the death of his son, and plans to retaliate by launching ballistic missiles armed with nuclear warheads at the East Coast of the United States, with predicted losses of over 41 million people. When the Task Force operatives arrive at the facility in Russia, Zakhaev manages to launch ICBMs towards the United States. However, the squad successfully seizes the silo command room and remote detonates the missiles over the Atlantic. They escape the facility in military trucks with Zakhaev's forces in hot pursuit.

Before the squad can escape across a nearby bridge, it is destroyed by an Mi-24 Hind, leaving them trapped. Zakhaev's forces arrive and engage the remaining members of the strike force. Gaz receives a call from Kamarov, informing him that his forces are on their way to help. On the bridge, a gas tanker explodes, incapacitating most of the soldiers nearby, except Griggs, who is killed while trying to pull MacTavish to safety. Zakhaev, along with two of his soldiers, begin executing Gaz and other surviving members of the strike force. Before he reaches Soap and Price, he is distracted by the destruction of his gunship and the arrival of the Loyalist helicopters. As Zakhaev looks away, Price slides his pistol to Soap, who shoots and kills Zakhaev and his two guards. When Kamarov and his team arrive, MacTavish is evacuated to safety, while a Russian medic attempts to resuscitate Price.