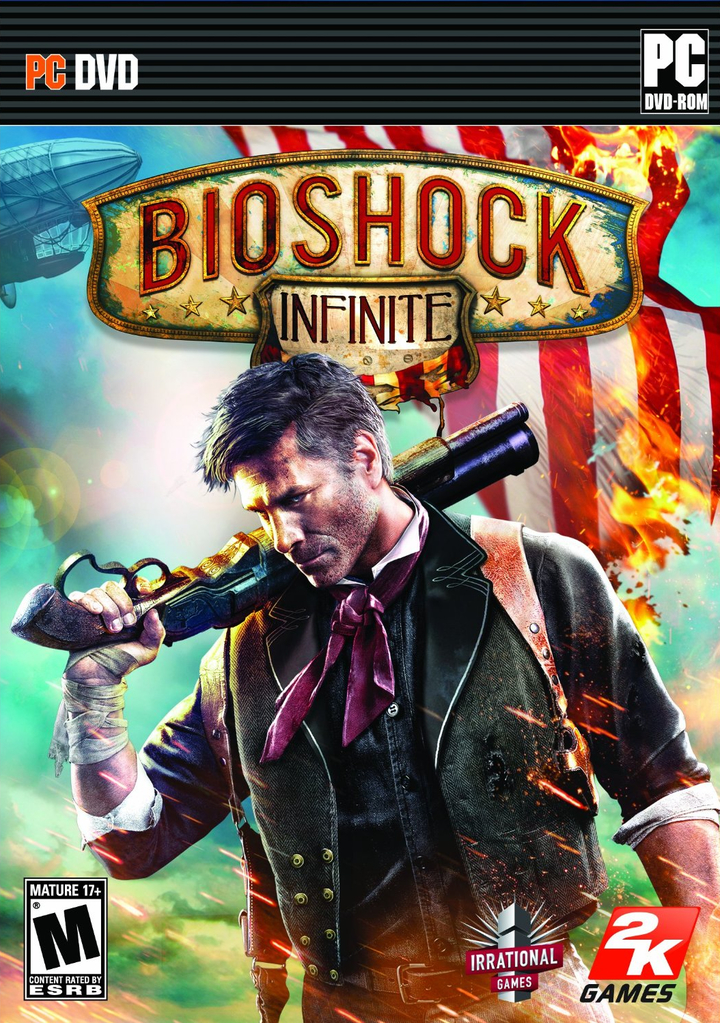 The events of the game take place in 1912. The player assumes the identity of Booker DeWitt, a disgraced former agent of the Pinkerton National Detective Agency. He had witnessed events at the Battle of Wounded Knee that changed him, leading to excessive drinking and gambling; he was subsequently dismissed for behavior beyond the acceptable bounds of the Agency.

The events of the game take place in 1912. The player assumes the identity of Booker DeWitt, a disgraced former agent of the Pinkerton National Detective Agency. He had witnessed events at the Battle of Wounded Knee that changed him, leading to excessive drinking and gambling; he was subsequently dismissed for behavior beyond the acceptable bounds of the Agency. He is hired by mysterious individuals, aware of Columbia's location, and tasked to infiltrate the air-city and rescue a young woman named Elizabeth, who has been held aboard the air-city for the last twelve years. Completing the task and returning Elizabeth to New York City would clear Booker of "old debts", but this would be his last chance to clear them.

Booker is taken by boat to an island lighthouse near Maine that houses a rocket silo, from which he is taken to Columbia. His arrival there is initially quiet; he is baptized by the population before allowed to explore the city. However, while at a carnival, one citizen notices a tattoo on Booker's wrist, with the letters "AD", a sign of a "false shephard" that will bring Comstock's downfall by taking away his "lamb", purportedly Elizabeth. Booker becomes a target of Comstock's forces from this discovery, and he is forced into the conflict of the city while still seeking Elizabeth. Though Booker finds Elizabeth easily enough, he quickly discovers that Elizabeth is central to the civil war raging in the city, her rescue being the start of the chain of events that ultimately lead to Columbia's down-fall. Elizabeth, when first rescued, is meek and timid, and only just coming to grasp her abilities with her powers, but as she is escorted by Booker, becomes bolder and more confident, shown through both physical appearance and her changes in outfit. Each faction seeks to use Elizabeth to turn the tide of the conflict in their favor; the Founders believe Elizabeth's powers can help end the conflict and place them back in control, while the Vox Populi would rather kill Elizabeth than allow the Founders to get their hands on her, believing a prophecy that if Elizabeth falls, so does Columbia. Booker and Elizabeth are forced to place their trust in one another in order to escape. Elizabeth also seeks to understand the powers that she has been given, believing Comstock to be responsible, and refuses to leave Columbia until she learns the truth. Booker comes to fear the power that Elizabeth possesses; a scene during one of the game's preview trailers shows Booker to be more afraid of Elizabeth than God. To complicate matters, the pair is chased by Songbird, a large, robotic bird-like creature who had been Elizabeth's friend and warden over the last twelve years of her imprisonment. Songbird was designed by its creator to feel betrayal should Elizabeth escape, comparable to an abusive spouse, according to Hilary Goldstein of IGN, and Elizabeth notes she "would rather be killed than be recaptured by Songbird."

In addition to the internal strife, Columbia is ravaged by tears in the fabric of space-time. The game begins with a quote from a fictional work Barriers to Trans-dimensional Travel purportly published in 1889. A strange shimmering effect as seen by Booker causes momentary changes to pictures, banners, and people, representing the nearby presence of a tear; in one example, Booker, while watching a Founder give a speech, experiences a brief shimmer where a patriotic button on the Founder's jacket briefly changes to that of the hammer and sickle associated with Communism. The tears have brought seemingly anachronistic elements into the Columbia of 1912; for example, an early gameplay demo footage features a record player in a bar plays a woman singing the lyrics to Tears for Fears' 1985 song "Everybody Wants to Rule the World"; a later press reveal included similar covers of 1933's "Goodnight, Irene" by Huddie Ledbetter, sung in chorus by a large group of Columbia's citizens, 1966's "God Only Knows" by The Beach Boys, sung by a barbershop quartet, and 1983's "Girls Just Want To Have Fun" by Cyndi Lauper. 1UP.com's preview of the 2011 E3 game demonstration denotes that at one point, Booker and Elizabeth find themselves in 1983, evident by a movie marquee showing Revenge of the Jedi (the original working name for Return of the Jedi), a result of a misfire of Elizabeth's powers involving tears in the fabric of space-time when she tries to help revive a horse. The scene was part in a media preview event in December 2012, though in this case, the events occurred within a test laboratory, with Elizabeth expressing an interest in going to Paris and opening a rift to see the marquee for the film in French (La Revanche du Jedi).

Levine has stated that the ending of Infinite is "like nothing you've experienced in a video game before"; the story purposely avoids a problem that arose from the original BioShock in which, after the death of Andrew Ryan in the middle of the game, "the story loses some of its steam".

Though the game takes place before the events of the previous two BioShock games (occurring in 1960 and 1968, respectively), Irrational Games has not confirmed if BioShock Infinite shares the same universe with these titles; Ken Levine left the question of the possibility unanswered in an interview stemming from the game's announcement.