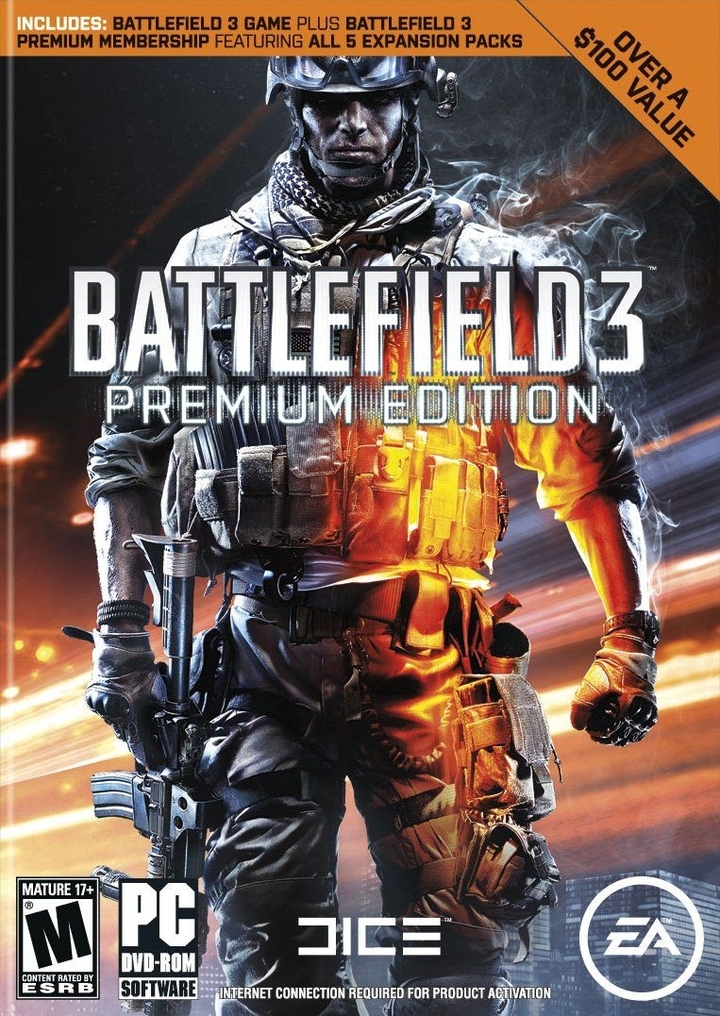 Battlefield 3 is a First-Person Shooter (FPS) that is designed to attack your senses, delivering a visceral combat experience like no other FPS before it. Sequel to 2005's Battlefield 2, Battlefield 3 utilizes the updated Frostbite 2 game engine, which allows for advanced destruction, sound, and graphics as well as a focus on dense in-game urban settings.

Battlefield 3 is a First-Person Shooter (FPS) that is designed to attack your senses, delivering a visceral combat experience like no other FPS before it. Sequel to 2005's Battlefield 2, Battlefield 3 utilizes the updated Frostbite 2 game engine, which allows for advanced destruction, sound, and graphics as well as a focus on dense in-game urban settings. Additional game features include: classic Battlefield mission-based gameplay, an impressive array of vehicles including jets and tanks, large-scale maps, an updated soldier class, 2-24 player support online and more.

The special premium edition contains a variety of bonus digital items. See the complete list of these below.

Battlefield 3 game logo with M ratingLeading your squad of Marines in Battlefield 3
Heart-pounding mission-based combat and maximized damage.
View larger
Close-up image of jet air support in Battlefield 3
Unparalleled vehicular warfare.
View larger
Return to the Battlefield
In Battlefield 3 players take command of a team of elite US Marines as they experience heart-pounding misson-based gameplay ranging across diverse locations from around the globe including Paris, Tehran and New York. Along with ground combat, vehicular combat plays a major role with vehicles available including tanks as well as air support, featuring infrared and satellite imaging. The game contains both single player missions and competitive and co-op multiplayer action supporting up to 24 players online, and set in diverse locations from around the globe.

The State-of-the-art Frostbite 2 Engine
Battlefield 3 leaps ahead of the competition with the power of Frostbite 2, the next installment of game developer Dice's cutting-edge game engine. This state-of-the-art technology is the foundation on which Battlefield 3 is built, delivering superior visual quality, a grand sense of scale, massive destruction, dynamic audio and incredibly lifelike character animations. As bullets whiz by, walls crumble, and explosions throw you to the ground - the battlefield feels more alive and interactive than ever before.

The Benefits of a Battlefield 3 Premium Membership
With Battlefield 3 Premium membership included with this game edition, you get a digital service which includes all five themed expansion packs for Battlefield 3, including 'Back to Karkand' and 'Close Quarters,' as well as early access to 'Armored Kill,' 'Aftermath' and 'End Game.' Together these five digital expansion packs deliver a ton of new content, including 20 new maps, new weapons, more than 10 new vehicles, and four new game modes. You also get exclusive in-game items not available anywhere else, including the ACB-90 knife, a set of dog tags, and exclusive soldier and weapon camos. Plus, your membership lets you access powerful new features such as the ability to reset stats, queue priority into servers, and new decals for Platoon emblems.

You can also get a jump on the competition online with the Multiplayer Head Start Kit. The kit gives you immediate access to such powerful items as heat-seeking AA missiles for jets and helicopters, special gadgets such as the defibrillator, and TUGS sensor, and weapons like the 40MM grenade launcher, M416 rifle, and M249 light machine gun. With 18 weapons, gadgets, and vehicle upgrades in all, the Multiplayer Head Start Kit is the edge you need to start dominating in online warfare.

System Requirements
Minimum
OS: Windows Vista or Windows 7
Processor: Core 2 Duo 2.4 GHz or Althon X2 2.7 GHz
RAM: 2 GB
Graphic card: DirectX 10 or 11 compatible Nvidia or AMD ATI card, ATI Radeon 3870 or higher, Nvidia GeForce 8800 GT or higher
Graphics card memory: 512 MB
Sound card: DirectX compatible sound card
Hard drive: 15 GB for disc version or 10 GB for digital version
Recommended
OS: Windows 7 64-bit
Processor: Quad-core Intel or AMD CPU
RAM: 4 GB
Graphics card: DirectX 11 Nvidia or AMD ATI card, Nvidia GeForce GTX 560 or ATI Radeon 6950
Graphics card memory: 1 GB
Sound card: DirectX compatible sound card
Hard drive: 15 GB for disc version or 10 GB for digital version
Key Game Features
The Frostbite 2 Game Engine - Battlefield 3 introduces Frostbite 2, the incredible technology that takes animation, destruction, lighting, scale and audio to new heights. Built upon this powerful game engine, Battlefield 3 immerses players physically and emotionally to the world around them like never before.
Feel the Battle - Feel the impact of bullets and explosions, drag your fallen comrades to safety, and mount your weapon on almost any part of the terrain. Battlefield 3's cutting edge animation, spectacular visuals and real as hell battle gameplay attack your senses and make you feel the visceral warriors experience like no other FPS.
Unparalleled Vehicle Warfare - The best online vehicle warfare experience gets even better with a fitting sonic boom as fighter jets headline along with an impressive lineup of land, air and sea vehicles, all at your command.
Urban Combat - Take the fight to iconic and unexpected places in the USA, Middle East, and Europe including claustrophobic streets, metropolitan downtowns, and open, vehicle-friendly landscapes as you fight your way through the war of tomorrow.
Multiplayer Mayhem - Experience gripping multiplayer action with 2-24 player battles supported online.
Amazing Animation - The DICE team set out to takes animation to the next level with ANT technology (previously used in FIFA games) that now allows the creation of more believable behavior than ever before in an FPS.
Fight to Scale - Simply put, in Battlefield 3 you will be able to engage across some of the largest maps ever created, while close quarter combat is available too.
Massive Destruction - Destruction is enhanced on both a macro and micro level. Chips fly off blocks of concrete used for cover, while whole facades and buildings collapse in screeching clouds of dust and debris.
Best-in-Class Audio - Building on acclaimed High Dynamic Range (HDR) audio from previous Battlefield games, Battlefield 3 builds on the best-in-class legacy with a brutally realistic soundscape.